Sunday before last I had the opportunity to hear a panel of accomplished artists from three different New Mexico pueblos speak about their work and about the history and current situation of Pueblo textiles.  It was eye-opening for me. The discussion was sponsored by the School for Advanced Research and held at the New Mexico Museum of Art.  The moderator of the discussion was Brian Vallo (Acoma), Director of the Indian Arts Research Center at the School for Advanced Research.  Artist panelists were Isabel Gonzalez (Jemez), Aric Chopito (Zuni), and Louie Garcia (Tiwa).


As I listened to the panelists, I discovered that I am almost wholly ignorant of Pueblo textile traditions.  Like many fiber artists, I am acquainted with Navajo and Rio Grande weaving and Spanish colcha embroidery. Living in New Mexico I am blessed with the frequent opportunity to see examples of these traditional art forms. But weaving and embroidery by members of the 19 pueblos?  Not so much.  I learned from the panelists that these traditions have nearly died out, and while there is some resurgence of interest in teaching and learning traditional skills and practices, their survival is by no means certain.

One problem that many of us fiber artists understand it is that it is very hard to survive on one’s income from weaving or embroidery. The process is so time-consuming that the products are out of reach for many.  Another issue is that non-native weavers are producing Pueblo-type textiles and selling them to Pueblo people for much less than native artists using traditional methods and practices can do.

This brings me to my second big realization.  My attitude about appropriation shifted 180 degrees as a result of this panel discussion.  I confess:  I had previously thought that cultures have always borrowed from one another, and they always will.  It thought it is pointless to insist on the purity of an artistic tradition and futile to try to preserve it in some kind of bubble from outside contamination.  The history of art, music, literature and craft are replete with examples of cross-pollination between cultures.  But as I listened to these artists speak about how intimately intertwined their processes are with sacred prayers, stories, rituals, and family and community history, I realized that in the American context, “borrowing” by non-Natives is at best naive, uninformed opportunism and at worst a cynical ripping off.

Context is everything. Given the facts of American history, non-Native artists simply have no right to attempt to reproduce Native textiles in their forms, patterns, and techniques. They are not ours to use.
Besides, if non-Native appropriation of Native work offends Natives, that is in itself a sufficiently powerful reason not to do it.  Human values of empathy, understanding and reconciliation outweigh artistic concerns.  Besides, as an Anglo of mostly European descent, I have plenty of material and technique from my own artistic lineage to explore and use.

I recognize that I am rather late in coming to this realization.  The debate about appropriation has been raging for quite awhile.  Recently, Rebecca Mezoff and Michiele Elliott have written movingly of their own experience with these issues.

The third big realization I had was related to the second. Each artist spoke repeatedly about how their work and each part of the process was informed by communal history and sacred beliefs.  We modern artists tend to see our work as individual self-expression, or perhaps a response to contemporary issues and life, but rarely as part of a larger sacred purpose.  Our mission for over 100 years has been to innovate, our mantra has been to “make it new,” while for these artists, the preservation of traditional techniques for the good of the wider community is paramount.

Isabel teared up when she described how her painstakingly embroidered pieces are used in sacred ceremonies.  Aric shared his attempt, with his son, to make a rabbit skin blanket like those that were made by members of his community over a century ago, an example of which he found in a museum collection. The laborious process was accompanied throughout by the saying of prayers for the good of the community. When the blanket was complete, Aric and his son heard the patter of rain on the roof . . . as if heaven itself, in this arid country, had seen and blessed their efforts.  Louie spoke of how he is teaching weaving to Pueblo people, but acknowledged that only a tiny percentage of his students have the gifts and resources necesssary to continue weaving.

How many of us (and I include myself in this question) look up from our work to consider its role in our larger community—beyond commerce?  Those of us who teach may be contributing to the greater good (I hope and believe this is true) but we probably don’t see it as part of a communal sacred trust.  How can the practice of our art forms help to repair the world?

I am far from having the answers to these questions, but I am grateful for the chance to consider them in a new light. I look forward to finding out more about Pueblo textiles. If you are in the Albuquerque area, you might plan to check out this event Louie shared: 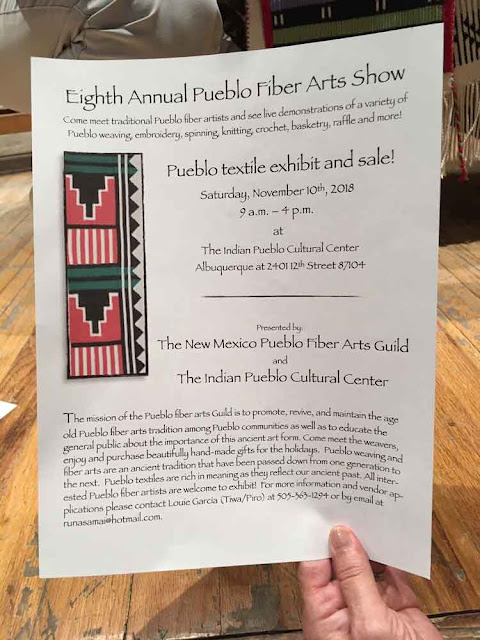 Louie is doing some great work in NM for Pueblo weavers. I was able to go to a talk and demo by him at the Folk Art Museum. Smart and articulate and it was fascinating to see him work.

At the recent Textile Society of America conference in Vanocuver, the keynote was given by Meghann O'Brien who is from the Haida tribe and she talked about this subject. About how the weaving and basketry all has connections to ceremony. She has a show in Vancouver right now and I was able to see her Sky Blanket. She talked beautifully about wanting that textile to return to her tribe so that it could be part of important ceremonies which was why it was made (it has been on tour since she finished it in 2014). Your thoughts about Pueblo weavers remind me of this strongly. As I heard from several native people at the conference, their art comes from spiritual places including ceremony. It is sold to support themselves, but that might not be their choice. (I am not sure where I'm going with that, but wanted to say I appreciate your thoughts here.)

I appreciate the opportunity to explore this conundrum again. I am so in love with the weaving techiques and art of Navajo weavers. I hope my use of these techniques is more about appreciation rather than appropriation.

Thank you Molly for a thought provoking post. I will head to Gallup this summer for a week long class at Weaving in Beauty Mercantile to learn more.

Rebecca, Thanks for adding your experience in Vancouver to this discussion. This is clearly an issue with worldwide relevance. It is heartbreaking to me to think that some Native weavers are selling their work reluctantly, because they need to. Indeed, heartbreak was a strong undercurrent in the whole panel discussion I heard here.

Michiele, Thanks for chiming in. I totally agree with you about struggling with what to do with our own heartfelt appreciation for Native work, how to be inspired and show appreciation without appropriating. I was thinking about the wedge weave technique, which seems to have become mainstream more so than other Native techniques and patterns. I wonder what others think.
I have wanted to take a class at Weaving in Beauty! I really look forward to hearing your report on that! Let me know if you come through Santa Fe!

As usual you gave us plenty to think about. I am not sure how I feel about this. While I recognize that their work is grounded in their beliefs I feel strongly that it is important to pass on techniques to those who are eager to learn them. I would say that the traditional patterns are theirs but if someone wants to learn the techniques and weave their own interpretation of their love of a landscape (not necessarily the west),their own spiritual ideals or dreams, that is up to that person. I am working on an art quilt that incorporates symbolism, mostly from my dreams, which means that everything I have learned is grist for that unconscious mill; how it comes out after being process by my subconscious is mine, but I try to filter it through a lens of not "stealing" from other cultures. I find it a joyful dilemma.

Thanks for writing! It is a dilemma. Obviously we are all influenced, often subconsciously, by everything we have seen and learned, and it can be very hard to tease out what is ours and what is someone else’s. I agree with you that it’s more problematic when we copy specific patterns that have special sacred meanings to specific peoples, than it is to use a particular technique in our own way to make our own communication. But I’m willing to consider that I could be wrong on this!

Yes, Mary, I’m thinking that too. As Michiele pointed out too, some Native weavers happily teach their techniques to non-Natives. But I think many also draw a line and do not share everything. As is their right. And we need to be careful as you say not to use others’ sacred symbols and patterns casually.

Fascinating perspective. Thanks for the discussion everybody.