How does travel impact your work?

Summer is a season for travel, and it seems like a good time to raise a question with you, dear readers, that I've been mulling over.  How does your travel impact your creative work, in fiber or any other medium?  Do you try to take what you've seen and translate it into your own work?  Or is travel more inspiring in a general way, allowing you to step out of your daily life, refresh your mind and spirit, and broaden your visual horizons?  I, along with many weavers in the US and around the world, have recently enjoyed following the textile-oriented travels of Robbie LaFleur and Rebecca Mezoff, and I am excited to see how their travels and research impact their work.  Their generous sharing of images and insights has already been helpful for many of us in the weaving community.

My own recent journeys have not been quite as far afield or as intensely fiber-focused, but I've taken a couple of fun trips so far this year, one to Guatemala and the other just over a week ago to the Four Corners area of the U.S., encompassing Zion and Bryce Canyon National Parks and Monument Valley Tribal Park.  On each trip I took dozens, maybe hundreds, of photos, and my mind was whirring with ideas as to how I might take what I'd seen and use it in tapestry somehow.

In the Four Corners region I was awed by the scale and patterning of natural formations.  At Zion, desert varnish painted the cliff walls with shiny areas and with abstract expressionist drip patterns.  I learned that in geological terms the wedge weave pattern in the cliff faces is due to crossbedding of different layers of rock. 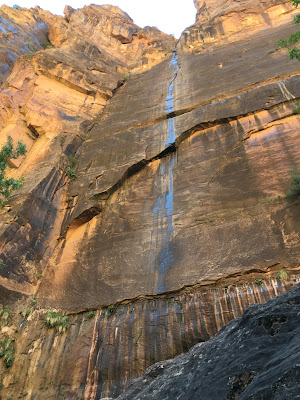 At Bryce Canyon I was intrigued by the weird and wildly detailed hoodoos formed by erosion.  Scores of spires and narrow fingers and canyons made cities of orange and white rock.  It was spectacular, and yet seemed impossible to try to weave, at least for me.  If you abstracted the detailed forms enough to weave them you'd lose the impact, I think.  (I'd love to see a tapestry inspired by Bryce that proves me wrong!)


The formations of Monument Valley are truly monumental.  In movies and photographs the monuments are often pictured all together in the landscape, and thus they can look smaller than they really are.  In person the scale is immense; the tallest formation is 1000 feet high, the height of a 100-story building. 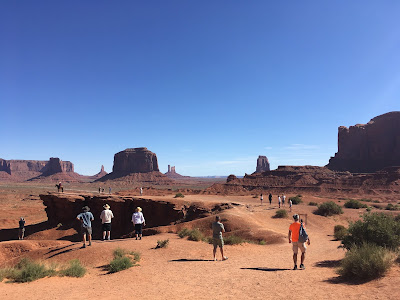 We love to look at the strange and unusual in the landscape--but does it make for good art?

In Guatemala, the landscape was gorgeous,  but I was most enchanted by the vibrant colors and the exuberant mixing of patterns in traditional Maya clothing.  I admired the incredible workmanship in the dyeing and weaving.   But since I returned, I've not found a way to directly translate any of that into my own work.  It could be that Mayan weaving is Mayan and not for me to emulate.   I have, though, continued to explore and research the ways in which color, culture and place intersect.  (If you have any books or articles to recommend, please share!)

But the question remains--how do you take what you've seen on a wonderful trip and use it once you're back in your regular environment?  I know that there is no one answer that could work for all artists, all trips, and all ways of working.  And yet I want to somehow integrate these experiences into my work.  I want them not to be isolated experiences.  It could be that they are influencing me in subliminal ways I'm not even aware of, which would be great!

In all these places I feel shrunk down to my right size, very very small in the grand scheme of things, and that is oddly comforting.  (Another way to say it is that I'm getting out of my studio and out of my own head!)  Perhaps this is the feeling that I can try to convey in my work, rather than a literal depiction of any of these places.  Hmm, how can I depict in visual terms the feeling of being small in a vast, diverse, and mysterious universe??  I recently read an article about British textile artist Claire Benn who is doing exciting work along these lines.

I did make sketches and notes of ideas after my trips; I will revisit these and see what "has legs" and is worth pursuing.  I'm curious about how you respond to travel once you're back in your studio.  Have you taken a trip where you've seen or done things that resulted in new work, perhaps even a new direction for you?  Or is it enough for travel to be a chance to rest and refresh your mind and spirit, to refill the well?  I'd love to hear from you, in the comments below or on Facebook or Instagram.
Posted by Molly Elkind at 7:56 AM 2 comments:

Santa Fe is blessed with a number of fabulous museums showing a wide range of art.  Somewhat belatedly, I have just visited the Museum of International Folk Art for the first time in any depth, and I was blown away.  The core of the museum's holdings is a collection of over 100,000 objects (not a typo) collected by Alexander Girard and donated to the museum.  Ten thousand (yes, 10,000) of these objects are on permanent display in one giant room, the overwhelming and wonderful "Multiple Visions:  A Common Bond" permanent exhibit.  Girard was an avid collector of folk art objects from 100 countries and six continents, and these objects are carefully arranged in dioramas and wall displays.  You could wander for a week in there discovering delightful things.  When I spotted a wall of needlework samplers I told my companions that was where they could find me at the end of the day.

But that's not what I'm writing about today.  This is just an extended introduction to the figure of Alexander Girard, a noted mid-20th-century designer of textiles, furniture and interiors.  Mid-century modern design has been enjoying a revival for some time now, and it is pure pleasure to see lots of objects from that time in the exhibit "Alexander Girard:  A Designer's Universe."  Perhaps the bright clear colors, clean design and upbeat mood of midcentury design appeals to us today for the same reason it did in the post-WWII, Cold War era. What really made the exhibit fun for me was the peek into Girard's design process.  The Vitra Design Museum in Germany organized the exhibit, and they included sketches, collages, and maquettes of many of Girard's projects in addition to the final products.  Girard was not only a voracious collector of folk art, he was a prolific producer of ideas and designs.  It was fun to see how he used watercolor sketches, collages, and miniature pasted-up textiles to develop designs just as we do today.


One of my favorite glimpses into Girard's creative process was this manifesto of sorts.  How many of us write notes to ourselves about the design principles we want to follow? 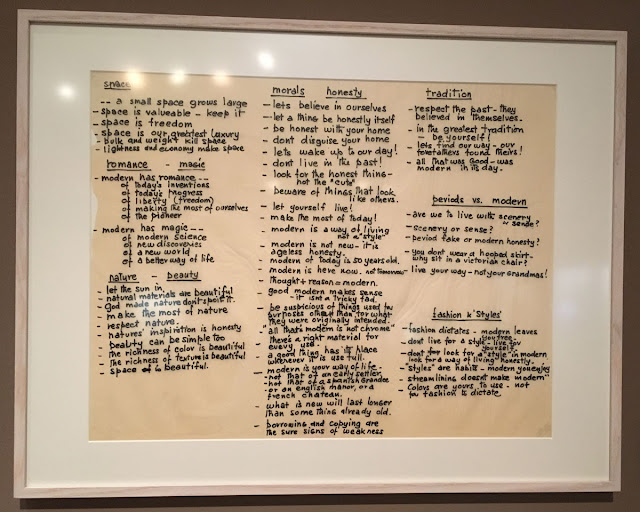 I know it's hard to read the text in this photo, so I'll pull out some of my favorite quotes:

"God made nature--don't spoil it.  Nature's inspiration is honesty.  Beauty can be simple too."

Girard's faith in "the modern" may seem quaint now:  "Modern has magic--of modern science, of new discoveries, of a new world, of a better way of life."  But he was adamant that there is no point in slavishly following traditional decor and designs that have outlived their  time:  "You don't wear a hooped skirt--why sit in a Victorian chair?"

"Don't look for a 'style' in modern--look for a way of living honestly. "

"Colors are yours to use--not for fashion to dictate."

"Respect the past--they believed in themselves.  In the greatest tradition--be yourself!"

Some advice never goes out of style.

Girard's gift for whimsy is apparent in his designs for wooden dolls.  I've never been a big fan of dolls, but these are totally charming to me. 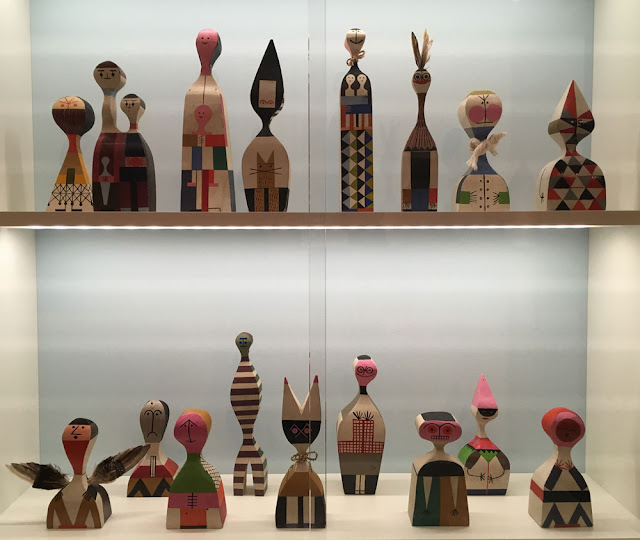 This exhibit runs through October 27.  I just may go back a third time.

Posted by Molly Elkind at 6:14 AM No comments: