Here's what I'm working on these days:

On my 4-shaft floor loom, there's a set of 8 tea towels.  I'm using my favorite yarn for that purpose, American Maid sustainably grown and naturally colored cotton yarn.  I'm weaving a pattern that I think of as a huge gingham check, using three different twill patterns and five colors:  two shades of green and two shades of brown.  The yarns are pretty pale until they're washed, so it may be hard to tell the colors apart on your screen. 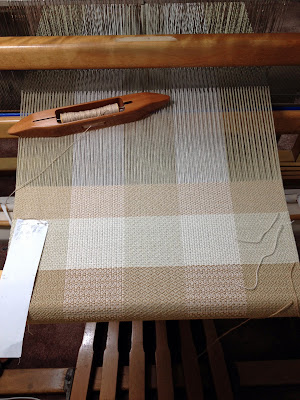 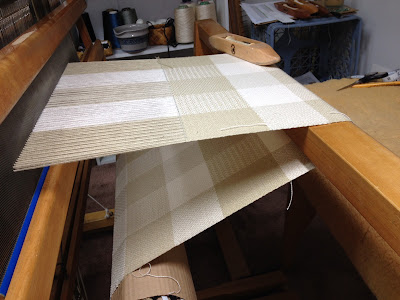 I've been blessed with a great response to these since my farming friend, Phil Busman of Cherith Farms, has allowed me to put them out at his CSA this summer.  The folks there really "get" the appeal of cotton grown without pesticides and colored without dyes.  Gotta keep those folks happy with more towels!  This bumper crop of heirloom tomatoes is keeping all of us happy. 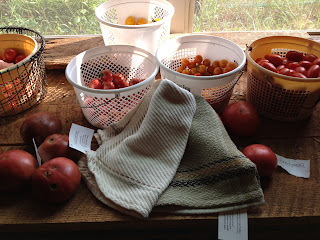 And, drum roll please, I have finally warped my big vertical tapestry loom.  As you can see I had to use a step-stool for part of the threading process.  Many thanks to Tommye Scanlin for her indispensable guide, complete with great photos, for how to dress a high-warp loom.  (See earlier post about "It Takes a Village. . . "). 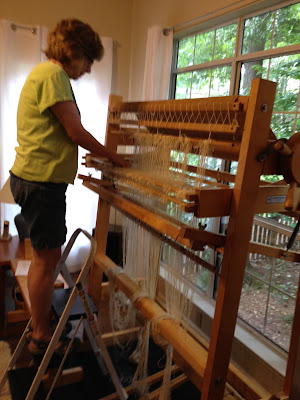 You may recall that my plan was that I'd scale up this tiny abstract tapestry I'd done years ago for my first try at weaving at a larger size on this new-to-me loom.  This design was loosely inspired by the general layout of illuminated manuscripts. 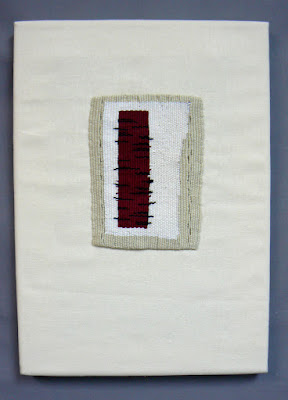 But after my exposure to pattern upon pattern in Istanbul, the arabesque has crept into my original design, and this is the collage I am using as my design.  No doubt it will evolve during the weaving process, but I am pretty excited about it.  It'll be a challenge to weave those graceful curves! 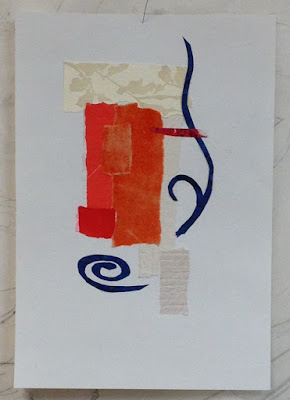 Meanwhile I've been busy with all the preparing-to-weave tasks:  sampling colors and types of yarn and scaling up the design into a cartoon (line drawing) that will go behind the warp and guide me as I weave.  For the first time for a tapestry, I have to calculate the amount of yarn I'll need, especially for the large expanse of white, to make sure I have enough before I begin.  It would not do to run out of that particular white yarn 3" from the top of the tapestry and then discover I can't find the same yarn to finish with!  So this morning I wove a small section with the white, measured it, and then unwove that section and measured the yarn.  Once I've got a full-size cartoon, I can calculate the number of square inches of the white background and figure out how many square inches of tapestry I can weave with the yarn I have on hand. 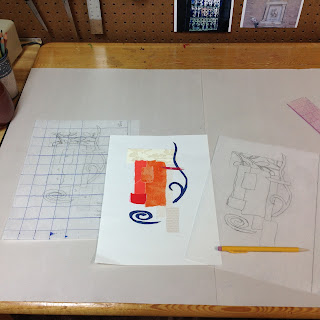 Two weeks ago I shared some of the jaw-dropping (to me, anyway) tile patterns I enjoyed at Topkapi Palace in Istanbul.  I was amazed at how the artisans had piled pattern upon pattern upon pattern and managed to create a lively, graceful, enchanting environment rather than an overwhelmingly busy one.  Our trip took us to various cities on the eastern Mediterranean and Adriatic seas, and everywhere I looked I saw fascinating patterns.

In the ruins of the ancient Roman city at Ephesus, Turkey, we saw intricate patterns in the mosaic floors of the Terrace Houses, where the richest citizens lived. 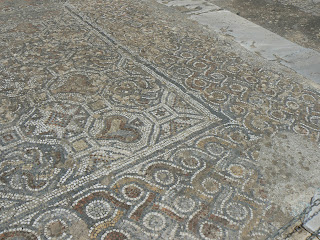 Some patterns were so bold and geometric, they reminded me of quilt block patterns. 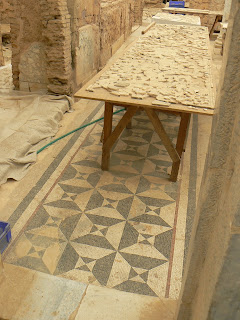 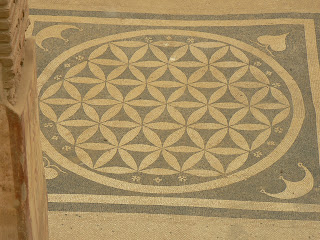 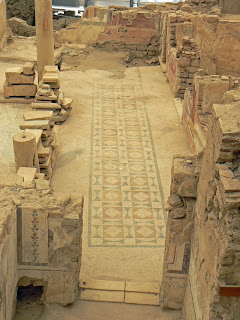 As you can see, excavation in the Terrace Houses is ongoing.  Some mosaic floors combined both figurative imagery and pattern: 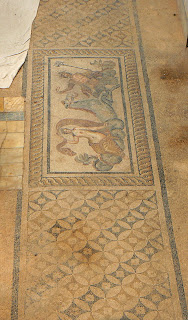 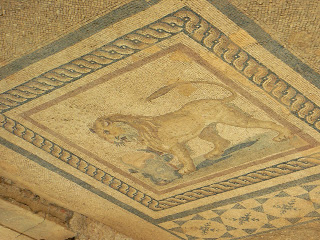 Venice was another city where the profusion of pattern was striking.  I was struck by the rhythmic repetition of columns and windows in the Doge's Palace in St. Mark's Square.  Large arches on the bottom level are surmounted by smaller, more ornate arches on the second level which are punctuated by quatrefoils, and then the facade of the upper level is decorated in a diamond pattern, with more arched windows.  This architectural cake is frosted with a lacy edging along the top. 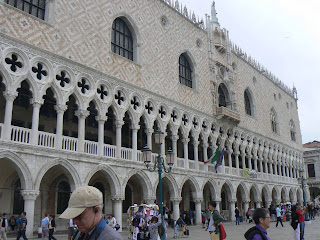 The architect of this building used a similar strategy: 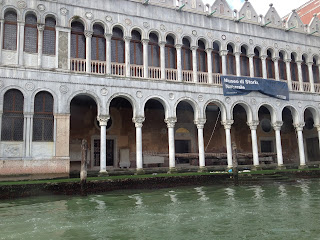 It would be hard to beat this building, the Procuratie Vecchio, also on St. Mark's, for the sheer power of the repetition of columns and windows on its long facade: 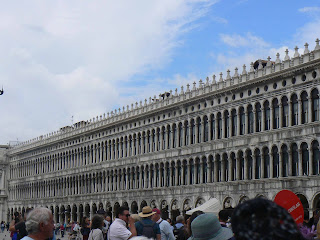 My favorite example of pattern on pattern was on a much smaller scale, and it occurred at the Peggy Guggenheim Collection in Venice.  This is an impressive assemblage of art by every modern master you've ever heard of, and many that were new to me, housed in the villa on the Grand Canal in which the heiress herself lived.  The windows are covered with decorative grates: 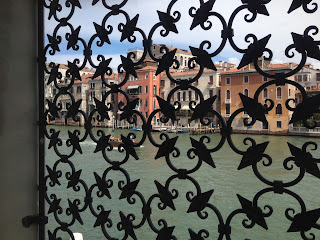 This is cool enough--to see the Grand Canal through this patterned grille.  But displayed in one window is a collection of blue glass sculptures (by Egidio Costantini, inspired by some sketches by Picasso), creating another layer: 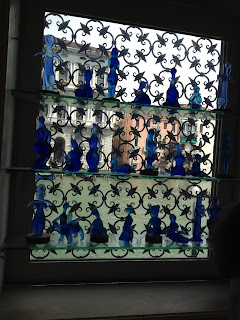 The glass work, the grate, the facade across the canal--layer upon layer of  blue-inflected pattern.  I felt I had come full circle since Istanbul. 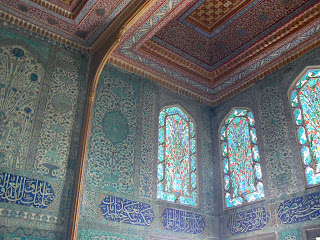 I'm still processing how this surfeit of pattern will influence my work.

Where do you enjoy pattern in your life?
Posted by Molly Elkind at 1:14 PM No comments:

. . . to make an artist.   There's a persistent myth out there of the solitary (starving) artist up in a garret, slaving away in solitude, a mad genius, alone and misunderstood.  This myth goes back to the Romantic era in art, literature and music, which glorified the unique vision of the individual artist who challenged conventional ways of seeing the world.  But the truth is that most artists rely very much on the moral (and financial) support of the communities they find along the way.  We need to see if what we do truly communicates, truly reaches anyone.  We need feedback.  We need to share in order to grow.  It takes a village to make an artist.

I saw this again over the weekend at the opening reception for my husband Sam's photography show, LatticeWork.  We are so grateful for the incredible support we have both enjoyed from the friends and family who show up to our shows, buy our work, and just generally show an interest in our efforts.  It means so much to have someone else's eyes on your work, telling you what they see, asking questions, and encouraging you to keep going.

I had lunch yesterday with Ann, one of the weavers who first taught me how to weave at the Chattahoochee Handweavers Guild (CHG).  This time she was sharing her tips and tricks on using the Fiberworks PCW, the weave drafting software I bought not long ago.  She opened up a whole new world of design possibilities for me as she unpacked the mysteries of the Tool and Tieup tabs!  I was happy when in return I was able to share a tip about weaving with a clasped weft.  (Put the second weft in a shuttle on the floor, and treat it as a floating selvedge, looping the primary weft around it on each pick, and pulling the clasped wefts to the desired spot along the fell.  I find it easier than juggling two shuttles.  See the photos below.  Of course I didn't invent this technique--I picked it up from another weaver here.)

I've been attending two study groups lately connected to the CHG.  The Tapestry Study Group was very helpful last week in looking at some of the collages I've been doing in preparation for weaving my next tapestry.  Amazingly there seemed to be a consensus that one was clearly the strongest, so I've been moving ahead on that front.  Thank you, fellow tapestry weavers!

The other study group is for those of us interested in sewing clothing.  Carmen does a fabulous job of gathering and sharing lots of resources on clothing design and construction.  I am learning so much from my fellow artists and sewists in this group.  (You can learn more about these groups at CHG's blog here--scroll down to posts from April 24 and May 7.)

There are several other local and national groups I belong to, each one a vital resource for sharing information, experience, and opportunities for shows, sales, and education.  Here's the list of links on my website:

If you're an artist and don't belong to at least one supportive study group, guild, class or club--go find one!  If you're not a practicing artist but love to support your friends who are--THANK YOU!  We appreciate your patronage.

Posted by Molly Elkind at 9:21 AM No comments:

I know a great photographer! 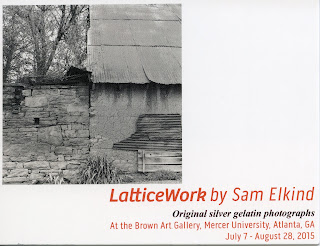 This week I'm turning the spotlight on the other artist who lives in our house, my husband Sam.  Since he was a teenager, Sam has worked with classic black and white darkroom photography.  Well, there were a few decades there where he pursued school, career, and child-raising, but several years ago he got serious about it again.

This weekend Sam's solo show, entitled LatticeWork, opens at the Swilley Library gallery space at Mercer University in Atlanta.  We hung the show on Monday and I have to say, even if I weren't married to the guy, I'd be impressed with this body of work! 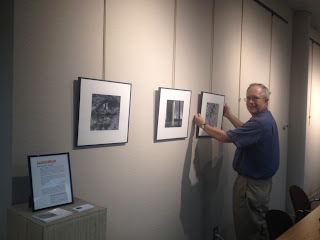 The show's title, LatticeWork, hints at the underlying structure of many of the compositions in this show.  What I love about this set of images is that while it is "straight" photography--there is no manipulation, digital or otherwise, of the image, no layering, no contrivance of the scene being shot--Sam's eye has selected compositions that hover on the line between realism and abstraction. 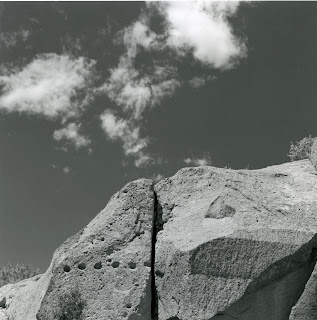 The image above was taken in New Mexico, at a ancestral Puebloan ruin near Santa Fe called Tsankawi.  While several of the images are from the Southwest, others are from closer to home, including scenes from north Georgia.