I had the good fortune recently to visit Istanbul and other ports on the Adriatic.  I am still processing everything I saw (literally--I took hundreds of photos), but I wanted to share with you some of what made a huge impression on me.  We visited Topkapi Palace in Istanbul, the dwelling place of the Ottoman sultans from the 15th to the 19th centuries.  I knew nothing about Topkapi before, and I was blown away by the rich profusion of pattern in the ceramic tiles that cover the walls and ceilings throughout the palace.  These doorways give a hint of what's to come. 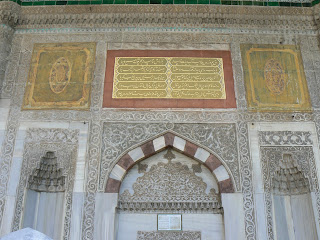 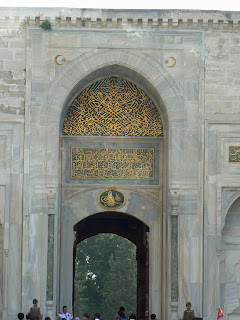 Inside, here is some of what we saw: 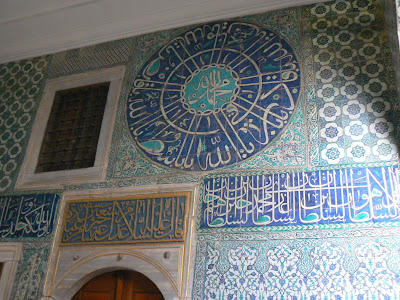 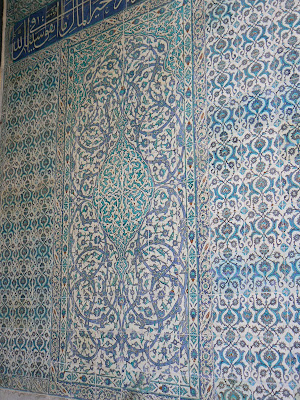 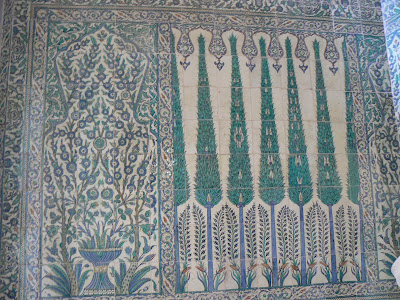 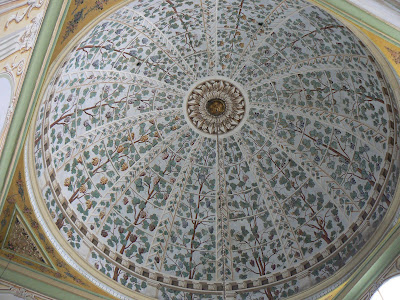 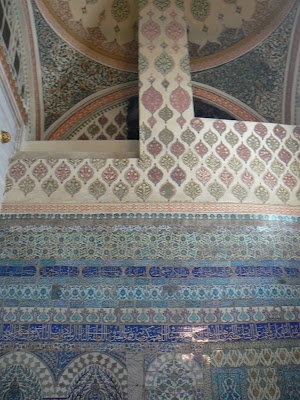 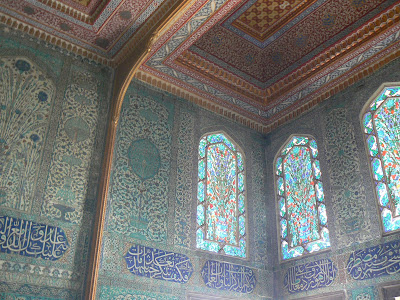 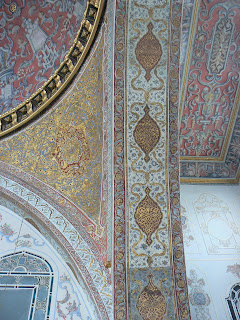 Do you detect in the focus of these photos the textile artist's obsession with pattern?  I have found it fun to randomly select one of my photographs and count the number of patterns in it.  Once I counted 18 patterns in close proximity.

My snapshots do not do justice to the richness of the colors and the fine workmanship of these 6" ceramic tiles, all carefully fitted together to create these huge arab-esque designs (now I know were that word comes from!).  The stylized forms and lines are rooted in nature but do not depict it realistically.  For me the rich profusion of line and shape and the juxtaposition of scales and colors have an energy that bursts the bounds of the strict symmetry of the patterns.  To my eye this riot of rhythmic repetition conveys a real delight in creating and even, I think, a delight in the Creation, an impulse to praise the richness and beauty of the world.  (No doubt, there was also the impulse to display the richness and power of the Sultan himself.)

It will be interesting to see if and how exposure to this way of making pattern and natural imagery may affect my own work.  I had thought my next tapestry would be rather minimal, simplified and quiet in composition; now I just want to layer pattern upon pattern.  I have ordered several books from the library to learn more about Iznik tiles (Iznik is the Turkish city where these tiles were made) and Islamic design in general.  Stay tuned. . . .

Recently, on her always-thought-provoking blog, quilt artist Elizabeth Barton wrote about why she teaches.  Much of what she said resonated with me.  She says, "For me teaching has always been about what I wanted to learn myself."   Like her, I love the process of researching, synthesizing and figuring out to present new information.  When I teach about something I've been learning about, I know what questions and issues students may run into, having recently encountered them myself.  I hope that my new enthusiasm for my subject is contagious.  And when the class and the subject are fresh, I am on my toes in a way that keeps the class experience interesting and alive for all of us.

I hear sometimes from other fiber artists that they wished they had some of the academic art training I got when I was working on my M.A. in fibers at the University of Louisville.  As a student I felt like I was being given a secret decoder ring for art--I was learning how value and contrast and balance work in a piece and thus avoiding mistakes, or at least taking a short cut through the painstaking process of trial and error.  And I'm still learning!

Lately I've found that analyzing and figuring out how to teach the elements of art and principles of design for textile artists is an inexhaustible topic.   The students I had in April in a weekend-long intensive class at Fiber Forum seemed to agree, saying they found the class very helpful.  In this class, called Design Intensive:

I'm offering this 12-hour Design Intensive in a few locations around Atlanta this summer and fall.  Registration is open now for these locations and dates:
For those who don't want quite such a long and intensive experience, check out my one-day Design Kickstarters class at CHG on August 15.  For this class I've boiled down the essential information and most helpful exercises from the Design Intensive. You'll learn how to start a visual journal (sketchbook), do some work with line, shape, and color, and talk about how to make the most of the always-too-limited time we have for our creative pursuits.

And if you're just itching to get your hands dirty exploring various fabric paints and approaches to surface design, you can take my one-day class, Fabric Painting 3 Ways, at CHG on August 22.. We'll experiment with silk paints, oil sticks, and watercolor crayons on cottons and silk.  You'll leave with sets of each kind of paint and a stack of samples you can use to make a small project or use as a springboard for more fabric painting.   I used oil sticks to transform the fabric on this quilt.


You can learn more about all the classes I currently offer at my website's workshops page.  And stay tuned. . . I am working now on some new class offerings.


Posted by Molly Elkind at 5:45 AM No comments:

So here's what's on my looms these days.  And on the drawing board. . .

I'm shifting for now from dishtowels back to garments.  I'm weaving two infinity wraps on a 5/2 white bamboo warp.  The idea is that these can take you from overly air-conditioned rooms into cool fall days.  Based on what I'm seeing in stores and magazines, indigo is still really hot, and I love it, so they will both be in that colorway.  The first is being woven in a large diamond twill, with navy 8/2 Tencel weft. 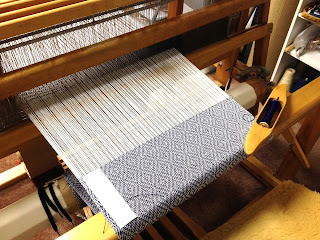 I'm thinking the second wrap will involve some warp painting in shades of indigo and gray along one edge.  Stay tuned for more on that.

As far as tapestry goes, I'm working on getting ready to weave my biggest one yet.  Since last fall I've had a Varpapuu loom sitting in my family room, silently saying, When are you going to warp me up?  (That hideous pink yarn that came with the loom is going to go away!) 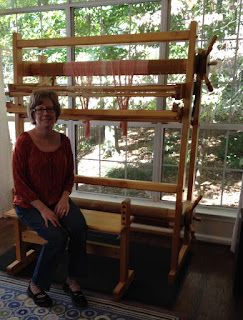 I've decided to set aside for awhile the design for the next piece in my series about the Virgin Mary, a complex triple portrait.  It's coming along, but it's pretty ambitious.  For this first large piece on a new-to-me loom I've decided to scale up a small piece I did years ago that I still really like.  It's loosely inspired by the layout of medieval illuminated manuscripts.  The woven piece below measures about 4" by 6", and it's mounted on a light-colored fabric stretched on stretcher bars. 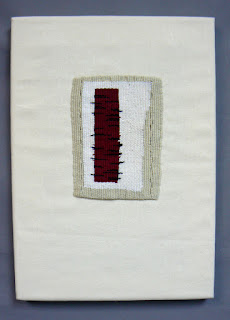 It's been interesting scaling this up--turns out it's not a simple matter of just multiplying the dimensions of the small piece by, say, a factor of 4 or 6.  I found I needed to change the design, adding wider borders to the woven image in order to create the same feeling as the fabric "mat" in the mount above.  The larger piece will be about 24" by 36".  For the first time I need to calculate whether I'll have enough seine twine for warp, and enough of each of the weft yarns I want to use.  I'm thinking I'll use several different reds, for example, and maybe even several different whites and beiges, to make for interesting variations in color and texture.  I need to do some sampling.

"The lyf so short, the craft so long to lerne." (Chaucer)
Posted by Molly Elkind at 1:09 PM No comments:

Email ThisBlogThis!Share to TwitterShare to FacebookShare to Pinterest
Labels: work in progress

Things That Can Go Wrong in Weaving, #2

Weavers know that one of the most common mistakes you can make while weaving is a treadling mistake--that is, pressing the wrong treadles (pedals) with your feet, thereby disrupting the regular weaving pattern.

I was weaving merrily along on these cotton dishtowels, enjoying the extended twill pattern that was making a nice thick diagonal texture on the fabric, when I noticed:

See the weird line running across the fabric, about 2" below the fell (the last row woven)?  I hiccuped somehow there, and kept weaving without noticing my mistake, or rather, thinking it was an error in beat that would work itself out.  To be honest, sometimes it's hard to see treadling errors while sitting at the loom--you have to get up and look at them at an angle from a greater distance.

Anyway, this was a treadling mistake, and the only way to fix it is to unweave.  Since I'd woven so far past the mistake, unweaving with the shuttle and treadles--basically reversing every press of a treadle and throw of the shuttle--would be very tedious.  I decided to cut out the woven wefts back to the point where I'd made the mistake.

Basically you separate the warps enough to insert your scissors, cutting down between two warps, carefully avoiding snipping either warp as you cut through row after row of weft.  Then you carefully pull apart the warps in each section, which allows you to loosen and pull out the cut wefts.  It takes some time.  I am happy to report that this time I did not cut any warps.  Thank goodness for small victories.

Then, once you've pulled out all the cut wefts and determined where you left off in the weaving sequence, all that remains is to re-weave.

Ahh.  This looks better.
Posted by Molly Elkind at 5:29 AM No comments:

Email ThisBlogThis!Share to TwitterShare to FacebookShare to Pinterest
Labels: things that can go wrong